In the UK the homeless have traditionally been allowed to legally occupy long-term empty property. These rights were critical at key moments in history (such as after the WW2 when Britain experienced a housing crisis and squatting was rife). Squatters’ rights came to an end on March 27th when the government criminalised squatting* in residential properties (the new law will come into effect in a matter of months).

I sent a Freedom of Information request to Lambeth Council to investigate the costs of evicting a long term squatted building in Brixton last summer. In July last year Lambeth Council evicted Clifton Mansions, a council owned block of 22 Victorian flats that have been squatted for the past two decades. Clifton Mansions is typical of a property that had been left derelict because its owners have not bothered to make use of it. Instead, individuals took it upon themselves to make homes for themselves in the flats at no cost to the state. While squatting may be detestable to those who hold property rights as the bedrock of civilization, for many squatting is a pragmatic solution to the extraordinarily high costs of housing and the surplus of houses that stand empty, unused and wasted.

Admittedly there are problems in squatting communities, just like any other community. I know a woman who has squatted a three-bedroom apartment, has been given a council flat (due to her use of heroine and crack cocaine) and is now renting the rooms of her squat. Obviously squatting is open to abuse – especially when communities are fragmented with weak social bonds. These activities invite authoritarian responses from the state.

Nevertheless, her indefensible behaviour pales in comparison to the miscarriage of justice created by this new law that elevates the right for a building to stand derelict over the right for the poor to create homes for themselves. Let’s be clear – it is already legal to evict squatters when you want to make use of a property (or sell it). The point of this law is to criminalise the precariously housed to give more power to the landlords – as it is only adding additional costs to the public purse. Take Clifton Mansion as an example. 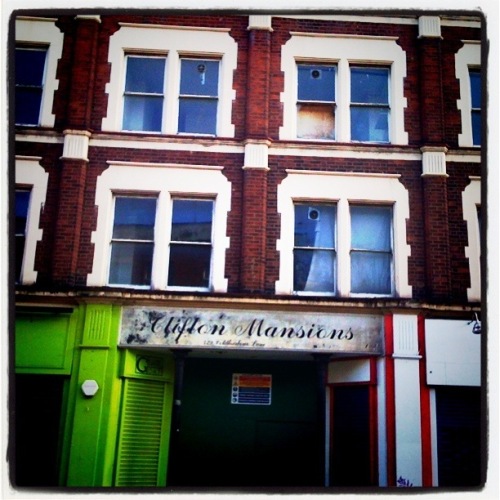 Clifton Mansions was evicted last July with a massive police operations that my Freedom of Information request revealed cost a whopping £380,875.40. I can believe it as I went down to witness this event and there was an enormous crowd of every type of costumed professional: the firemen, the welders, the plumbers, the abseilers, the community police, the normal policemen, the riot cops, dogs and vans and even a police helicopter. It appeared to be a contingent of about over a hundred of them in full force to evict the twenty odd flats. Still, this £380k figure is shocking. I am not a housing expert but surely the Council could have housed several hundred families for a year for £380k rather than make the residents of Clifton Mansions homeless?

The Freedom of Information response justified the expense with the following statement: ‘we urgently need to release the capital in the building to invest in our council housing stock. The money released by the sale of the block will dwarf the amount spent securing the building and safely evicting illegal occupants’. There are two things wrong with this statement. The first is when the council does sell this severely damaged derelict property they will have wasted a large slice of this sale on an overzealous eviction. Secondly, the council have not sold Clifton Mansion, but instead they have paid Camelot, a property security agency, £63,976.80 to make the flats habitable. 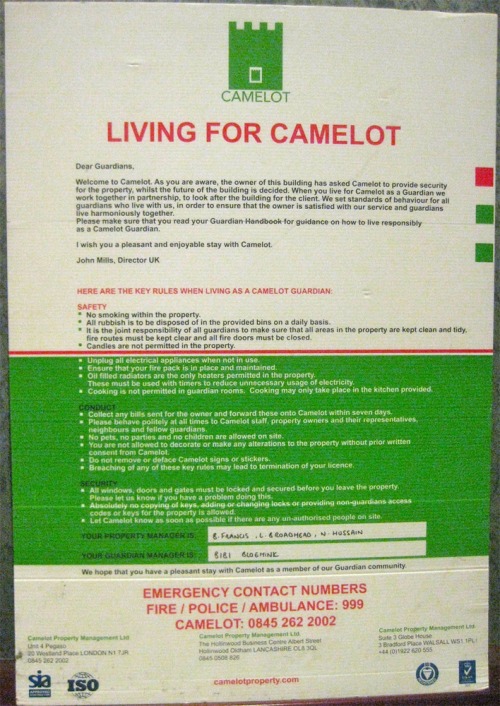 Additonally the council pay Camelot up to £1,650.00 per month to rent out the 22 flats (at 80% market rate) – obviously Camelot also makes a good wedge on the rental income (easily over £10k a month). In total Lambeth Council has paid to Camelot for repairs and monthly fees at Clifton Mansions is £66,596.98 (up to March 2012). Meanwhile, Camelot presents itself as a security firm, which allows it to get around giving tenants standard tenancy rights in decent accommodation. Instead, tenants (now called ‘guardians’ by Camelot) rent out flats that are the same derelict property that was once squatted. The council has invested in £66.5k (+£ £380.8k for the eviction) to give Camelot the opportunity to charge desperate Londoners rent in substandard property.

Camelot’s code of conduct for its ‘guardians’ contains serious infringements on the rights of tenants.** The code of conduct is an extraordinary authoritarian document. In exchange for the derelict flat at 80% rent, Camelot reserves the right to visit to inspect the entire property at any time to make sure guardians/tenants have no pets, parties or children, no smoking, no decorations and no candles on Camelot property. They can carry out these inspections without notice. Guardians/tenants must ‘behave politely to Camelot staff’. Camelot can give guardians/tenants as little as 2 weeks notice to terminate contract. If a guardian/tenants wants to move out they need to give 4 weeks notice. In case of contract breach, the guardians/tenants can be evicted immediately.

There are alternatives. In 2008-2009 a group of Brixton housing activists developed a proposal for a housing cooperative at Clifton Mansions. Although Lambeth Council now markets itself as the ‘cooperative council’ this proposal to make a cooperative in Clifton Mansions was flatly refused. Lambeth the co-operative council would rather pay Camelot to enforce draconian tenancy policies on residents than allow the Brixton community co-operatively house ourselves.

Is this the bleak future for the 1,000,000 empty properties in this country? Government policy could facilitate co-operative housing or it could force the homeless into tenancies with virtually no rights. Cooperative housing emerged in thousands of squatted properties in the 1980s and 1990s and offers a viable alternative to rising spectre of authoritarian security companies such as Camelot.

* Notes on the new Squatting Law:

The law was part of the Legal Aid, Sentencing and Punishment of Offenders Bill. It passed despite opposition by 96% of the supposed consultation and scores of professional statements: The Law Society, The Metropolitan Police, The Criminal Bar Association, The Magistrates Association, Crisis, Shelter, 160 legal experts and prominent academics. This law arrives in the context of dramatic increases in the rates of homelessness ­(a 14% rise last year) in a country with a total of between 750,000 to 1,000,000 empty properties.

Research conducted by the Squash Campaign indicates that the criminalising squatting will cost £790 million over five years (even if newly criminalized squatters are not sent to jail). The government did no research of their own to justify this new law. It was designed around the ideological commitments of the current government and the dramatic stories in the right winged press that often entirely misrepresented the current state of squatting law.

** Camelot Security refers to the tenants in the flats as ‘guardians’ – using that convenient neo-liberal linguistic trick that dehumanises groups of people as a prelude to depriving them of basic rights, and establishing commodity relations in new spheres of existence (as when citizens are redefined as consumers).

One thought on “What Next? The Rise of Authoritarian Housing”