Over the holidays I have read the latest Club of Rome report Bankrupting Nature. I did this not because I enjoy reading non-fiction over Christmas but because I am grateful for the time I have to celebrate and I am compelled to consider how others will be able to do the same considering the deterioration of global ecological systems.

Two things became apparent: 1) the extinction crises is accelerating, 2) we have more knowledge and understanding than ever to address ecological and social crises. That second point was the good news. The bad news is that I can say with some confidence, as someone who works in London at the interface of environmental communication, ecological informed design and sustainability education, that we are simply not making the ecological crises a priority. Instead of using the wealth that is still abundant in this country to address environmental problems – we are squandering the opportunities we now have to catalyze transformation.

With severe ecological destabilization, possibilities for future prosperity disappear. Yet in education and economic policy, the basic fact that we depend on the stability and abundance of the Earth is largely ignored. We are simply not building the social institutions that would enable social transformation. Part of the problem rests with the educational establishment; ecologically literacy is still marginal in higher education. For this reason, the capacity to understand, much less respond to current problems is extraordinarily low. This blog will review the state of our capacities for cultural transformation in the UK at the end of 2012 by looking (very briefly) at social institutions and social movements. I will start by proposing that we take note of the words of the Mayan people.

In 2012 we survived the final of all the anticipated ‘end of the worlds’ and the media typically simultaneously mocked and commercialized what became the spectacle of the end of Mayan Long Count calendar, the 5,125-year cycle that ended on 21 December 2012. A film called  ‘2012 The Mayan Word’ documented the voices of the Mayan people who had some potent things to say:

“The world is not ending. It is the opposite: we are finishing ourselves off…The prophecies are given for us to check ourselves. What are we doing? It’s clear that if we don’t do anything to recover the equilibrium of Mother Earth, we are digging our own grave” (Maria Amalia Mex Tu’n, 26 mins).

Later that day images began to appear on the Internet of tens of thousands of the Mayan Zapatistas marching, masked but in silence, through streets of towns and cities across Chiapas. 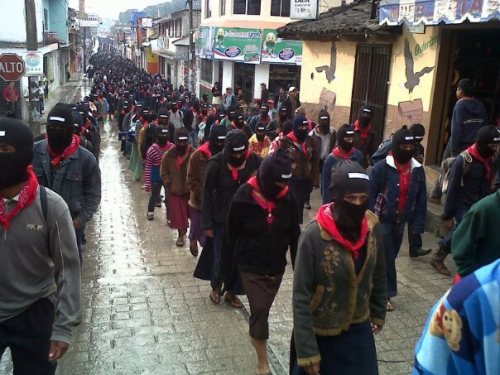 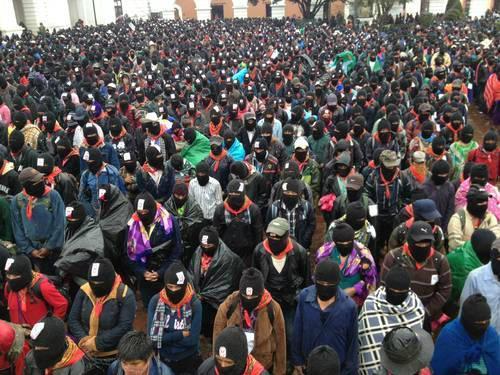 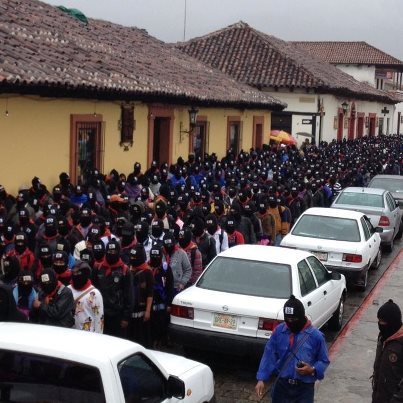 The Zapatistas are legendary for declaring the Mexican government illegitimate on January 1, 1994, the day when the North American Free Trade Agreement (NAFTA) came into effect. On 21 December 2012 they issued a new statement:

DID YOU HEAR IT?
It’s the sound of their world ending.
It’s that of ours resurging.The day that was the day, was night.
The night will be the day that will be the day.
DEMOCRACY!
LIBERTY!JUSTICE!
From the mountains of the Mexican Southeast.
For the Clandestine Revolutionary Indigenous – General Command of EZLN
Subcomandante Insurgente Marcos
Mexico, December of 2012

While talk of ‘Mother Earth’, the production value of the video, and the revolutionary Zapatistas might is not be many people’s cup of tea in the UK, the words and actions of the Mayans carry can an important message. The Mayans and other Indigenous people around the world have knowledge about the living on this Earth over hundreds of thousands of years. Considering the content in the Club or Rome report (and hundreds of similar scientific reports) Western civilization will need to demonstrate extraordinary capacities for transformation if it wants to survive the next century. We need to pay attention and ‘check ourselves’.

So with this in mind, just how legitimate is our own response in the UK to the ecological and social threats described in the Bankrupting Nature? In the UK social institutions maintain their legitimacy with claims that they are responding the environmental crisis with initiatives capable of transforming our economy into something that could exist in perpetuity. The single most important factor in the continued failure of the vast majority of initiatives is the dismal lack of ecological awareness demonstrated by those who put these projects into practice. A technologically advanced civilization that is not ecologically informed simply has no long-term prospects; it will not even understand the ways in which it is destroying itself. I have written an brief review of how social institutions fail to respond to environmental problems, by focusing on the RSA. This was originally part of this blog, but I have now posted this as a second blog here.

Ultimately, most social institutions simply do not seem to be either flexible or interested in responding to the environmental crisis in a serious way and the real push for radical change is coming from social movements using an astonishingly wide variety of tactics and strategies. One of my greatest fear at the end of 2012 is that while these movements are growing impressively all around the world, as the austerity takes effect (a result of the dire mismanagement and corruption of the political system and finanicial elites) our growing anger will be directed at each other, fueling class and race hostilities. This will prevent social movements from gaining ground. Unfortunately, I feel like I am witnessing this kind of thing happen – just when we need greater solidarity, I have felt disturbing retrenchment in 2012. London has been a site of extremes this year, a year of glory for those who celebrated the Olympics – and a year of desperate fears of austerity for others.

I am thankful and astonished at the capacities of new social movements. Occupy has effectively reestablished the debate about the legitimacy of capitalism. It is not without its problems. I am particularly concerned with insults and public mud-slinging which I see as deeply divisive – not only for the people involved but for those on the outside watching. To the activists I can only say: allow difference, allow people to learn, be kind, be welcoming. There is work to be done and we need people. How will we ever grow a movement if we insult those with different (yes, often naïve) politics? We must learn the difference between critiquing ideas and insulting someone’s integrity. This is a serious challenge when the changes necessary require such a dramatic review of so many of our basic assumptions. No one said any of this would be easy, but it will help if we are kinder to people with whom we have at least some common concerns.

The Maya remind us to pay attention to what is important and ‘to check ourselves’. In the UK, those with institutionalised political power continue to ignore the ways that the current system is responsible for the ecological crisis. Considering the current state of affairs, I think it about time Westerners started listening to the indigenous people of Mexico (and the rest of the world) for knowledge and ways of knowing we have dismissed for far too long.

Pleaste note: I am keen to write a serious review of the Club of Rome report but would like an organisation with some capacity to pay my wage for two or three days when I do this. If your organisation is interested in increasing knowledge on the ecological crisis (and what we can do about it) considering hiring/sponsoring me to write this review.