My paper proposal for the INTERNATIONAL ASSOCIATION FOR MEDIA AND COMMUNICATION RESEARCH 2015 conference: Hegemony or Resistance? On the Ambiguous Power of Communication has been accepted. This mapping research has had over 135,000k views on Visualizing.org. My abstract is below. 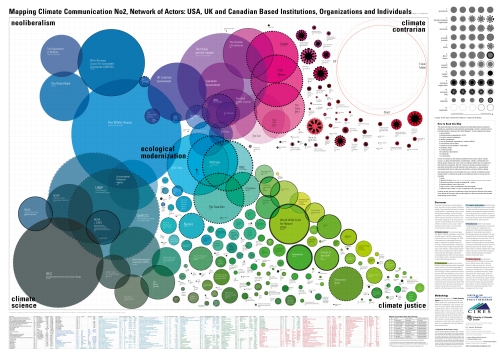 Mapping Climate Communication offers an overview of how climate change is communicated in the public realm by visualizing and contextualizing actors, events, actions and discourses influencing public opinion. Since communication happens at the level of rhetoric as well as the level of action, discourses in this project include explicit messages and also messages that are implicit within political, corporate and organizational activities and policy. This approach reveals tensions and contradictions in climate communication. The public is told that climate change is a serious threat but the same institutional actors continue to support carbon intensive development. The discursive confusion that results from contradictory communication on climate is theorized as central to the ongoing deadlock in climate policy. Explicit and implicit communication is at odds in the neoliberal discourse. This discourse often uses the language of the environmental movement to gain and maintain legitimacy and public trust. The danger here is that the climate movement’s work in creating awareness and policy opinions responding to climate change is simply used as convenient rhetoric and public relations messaging for continued and indeed exacerbated carbon intensive development.

Since the ecological modernization discourse is open to the use of market mechanisms to regulate climate change, this discourse often unwittingly erodes capacity for regulation as responsibility for a responding to climate change is captured by corporate interests and thus possibilities for climate regulation become even more remote. Despite green intentions of actors in the ecological modernization discourse, when this discourse fails to challenge neoliberalism, it is easily appropriated. It then serves to facilitate neoliberal processes, which in turn enables contrarian discourses, since neoliberalism transfers power from the public to the corporate sphere, where contrarian power is most concentrated. The historical appropriation and political neutralization of green movements is a dynamic that needs to be considered when theorizing climate communication.

Theorizing neoliberal climate change communication is a goal of this project. The implicit neoliberal discourse is one of market fundamentalism, wherein market “imperatives” and the “free market” sic always trump action on climate change. Since it is easier to say that lower emissions are necessary than to actually do the political work that will make this possible, this conflict between explicit and implicit messaging is important, especially for institutions with the political power to make the required changes. All three climate discourses that acknowledge the need for dramatic emissions reduction (climate science, climate justice and ecological modernization) must be aware of the ways in which the neoliberal discourse appropriates our rhetorical positions. Neoliberal actors with political power use the language of environmental movements to project the appearance of attempting to address climate change. Unfortunately, acting according to these imperatives is extraordinarily difficult within the ideological scaffolding of the neoliberal political project. With these dynamics in mind, it is evident that contrarians are not the only ones preventing action on climate change.

May 2015: Note I am not presenting this paper at the conference as I have no funding. A classic example of discursive discipline.