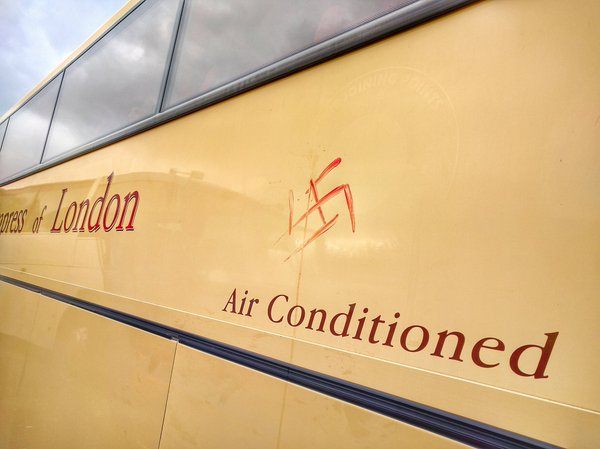 There is an impressive history in England of people standing up to fascists. The tradition of ¡No pasarán! meaning ”They shall not pass” was used by anti-fascists in the famous 1936 Battle of Cable Street. The concept is used today by people determined not to let fascists spread hate on the streets. Fascists must not be allowed to gather. It’s a simple rule and a good one.

Yesterday several hundred anti-fascists went to Dover as a counter demonstration to a march by the English Defense League and the National Front. A friend of mine was in a bus headed to Dover stopped at a service station when another bus full of EDL/NF racists Chelsea supporters pulled in the station. They immediately clocked that my friend’s bus was full of anti-fascists. They attacked. It was here that a Nazi drew a swastika in his own blood on side of the bus. This image of fascism in the UK is worth taking seriously.

Ordinary people stop fascism. It is up to us. I am thankful that my friends and hundreds of others stood up to these fascists this weekend.

In America, with Trump leading the race for the Republican presidential candidate we are all now dangerously close to have a blatant racist and quasi-fascist in the most powerful political position in the world.

When I was in Colorado last year I attended various Black LivessMatter marches. There was sometimes a little group of racists following along with hateful slogans. When I felt safe enough, I would challenge* these people. I always received a bunch of abuse. I hated doing it – but I don’t think racists should be allowed to protest without being challenged, so I did it anyway.

My friends in Colorado seemed to think that these people had every right to march around spreading hate. I don’t agree. The anti-fascist strategies in the United Kingdom work. They are time tested means of keeping racists and fascists from organising and spreading hate. We need more of this.

* When I say ‘challenge’ I mean I would ask them leading questions with the intention clarifying everyone’s intentions.