Approach media speculations about the cause Labour defeat with great skepticism. They will not own the way they have vilified the left Labour movement and destroyed this opportunity to create a fairer society and address climate change over the next decade. We did not lose because of Corbyn. We have lost this election because 40 years of neoliberalism have greatly diminished living standards for the majority, hollowed out the media and left people without access to the information and analysis they need to resist the political forces that will now take apart the NHS, sell off public services, avoid climate action, etc. Research at Loughborough university has demonstrated how negativity toward Labour in press in this election campaign outstrips all other party’s: “The overall high level of negativity towards the Labour Party has remained constant throughout the election campaign, increasing week-by-week. Manifesto and policy announcements have not managed to reverse this trend over the course of the campaign.” 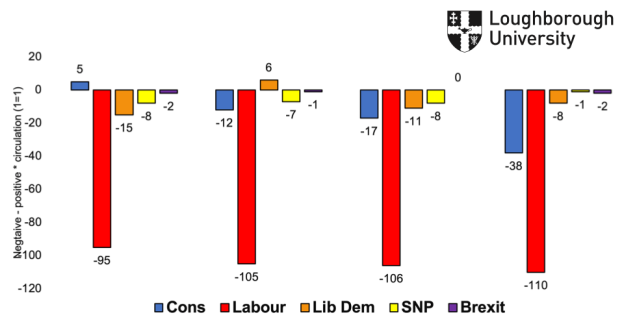 There is precious little left wing mainstream media to offer effective counter analysis – as both the BBC and The Guardian have been dominated by the viciously anti-JC centre right. The Corbyn-supporting social movement that tried to resist these forces did everything we could to bring counter analysis and narratives to people’s doorsteps over the last month. It was not enough. No where was that more apparent than in South Thanet where our brilliant Labour candidate was defeated by a corrupt Conservative quietly enabling the destruction of local health services.

So we need to digest this bitter pill. Social movements could not mobilise electoral support for a project that would address the needs of the majority within the context of attack by nearly all sectors of the media – as well as the dearth of political education to help people make sense of political forces undermining our interests. Yesterday I dealt with my election grief by attending Labour Transformed in London. There were lots good ideas and media reform and political education were among the most popular. Obviously these ideas have been around for a while – but maybe this historic defeat will catalyst appropriate support to these challenges. I am inspired by the Labour movement despite this huge set back and hope we can think about long term goals within the context of the losses that will be inevitable under this new far-right government.