As some of the readers of this blog will know I recently moved from London to Nederland, Colorado (a small town outside of Boulder – where I work). I arrived just in time for the Colorado flood last week. My tiny home up at 8500ft elevation was undamaged, but the water ran down the canyon ripping up both roads and houses down stream in Boulder and beyond.

Water from the mountains flowed down Boulder Creek at up to 25 times its normal intensity. The canyon road from Nederland into Boulder was badly damaged not only by mud and rockslides but by the erosion of its foundations as the earth dissolved into the river. Early this week I attended the town of Nederland post-flood recovery meeting where I witnessed the community coming to terms with the fact that the road we all depend on to get to Boulder has been partially washed away. Still we reminded ourselves that Nederland was lucky relative to many of our neighbours.

Behind the statistics are thousands of stories and personal tragedies: 8 people killed, 11,750 people evacuated, 18,000 homes damaged, 1,600 homes destroyed, at least 30 bridges lost and an unknown quantity of roads and railway tracks severely damaged. Even more serious environmental disasters are in process as oil, gas and toxic fracking chemicals (including known carcinogens and endocrine disruptors) spills have become apparent at the site of at least 10 of the hundreds of fracking sites in the flood zone.

Boulder County received more rainfall in 6 days that its average annual total precipitation. While this the flood was undoubtedly severe, contrary to many media reports it was not a 1000-year flood. It was closer to a 25 or 50-year flood (see Roger Pielke’s blog on this subject). Boulder is a city vulnerable to floods and has known worse floods in the past. It’s important to recognise that while this flood will be expensive and it was devastating to thousands of people who lost loved ones or their homes, this flood could have been a lot worse.

Here in Nederland over the past few days I have heard people say that closing the Canyon Road was impossible – the canyon road had to be open because they had to go to work. Others, once convinced the closure was necessary, said that we must rebuild the road so this could never happen again. Accepting entirely different local circumstances takes some getting used to. Accepting the fact that no road we build will necessarily withstand torrential rainfall is even harder.

The flood was a potent learning experience about how extreme weather makes us vulnerable. In dramatically disrupting normal routines, the flood shattered assumptions about how much our technology and infrastructure can provide for and protect us. Suddenly we need to focus on basic survival – and looking out for each other. Forced by dramatic circumstances out of our comfort zone, it’s a good time to consider how natural disasters impact our lives and what we can do to protect ourselves. When we think about risk and dangers associated with for natural disasters it is vital to put individual events in perspective. 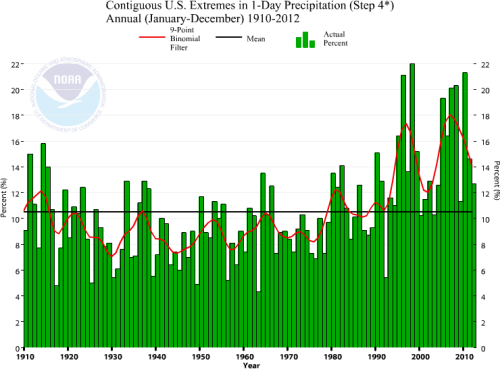 Whether or not climate change can be linked to this particular flood is not as relevant as whether we take this flood as an opportunity to consider humankind’s relationship to the natural world and ultimately our own vulnerability to extreme weather.

Extreme weather events and natural disasters are probably one of the most powerful opportunities we will have to help the public understand the risks associated with climate change. Let’s face it: intellectual arguments have not worked over the past few decades to convince Americans that climate change is happening and that we need to dramatically cut carbon emissions.

Educators and advocates have worked hard to get the public to engage with climate issues. Extreme weather events are the ultimate form of experiential education on the power of nature. Extreme weather forces us consider the danger of ignoring the ecological risks. As we rebuild from this disaster, it’s a good time to consider the risks associated with climate change.

What we know that this: Climate change is happening. We caused it. Climate change is a serious threat. There are things we can do. Building a basis for action starts with understanding the obstacles to climate literacy.

Unfortunately the consensus on climate is not what is either reported in the media or understood by the American public. Largely thanks to the work of fossil fuel industry funded think tanks and lobby groups the messages the public receives through the media on climate change have been disingenuous. Well-funded misinformation campaigns have contributed to a situation where climate change is near bottom of national priorities.

It is no longer only scientific data, an abstract concept. Climate change is a fact of life, a new normal to which we must adapt and mitigate. Knowledge about the climate is necessary but not sufficient. We must also develop the capacities to do something about it.

We are in this mess together – we will need to address this problem together. Extreme weather makes climate change real for more for all of us. Let us not lose this opportunity. Part two of this blog will explain how we can use disaster events as a catalyst for climate awareness and action.

2 thoughts on “The Colorado Flood: On Risk + Climate – What we can learn from natural disasters.”