Over the past six months I have been helping Occupy Design UK explore how design can be used to facilitate popular education on the structural causes of the recent economic crisis. During the London Design Festival we held an event at the V&A called ‘Exposing the 1% and De-branding the City’ where we examined information graphics and animations that illustrate the complexity of our economic system and exactly what went so wrong in the recent credit crisis. The following visualisations expose the dynamics and structural problems within the current economic system and propose what we can do to create a more resilient system for long-term prosperity, social justice and sustainability.

This animation features Marxist historian David Harvey’s analysis of the structural causes of the economic crisis and the role of crisis in the history of capitalism. Here animation studio Cognitive Media use the Monopoly metaphor that the Occupy Movement has also repeatedly used to describe the systemic dynamics of capitalism (another example can be found below). This video presents an overview of the contradictions of the capitalism system. While the Royal Society of Arts funded this animation, Harvey’s interpretation of the causes economic crisis remains marginal in mainstream economic discourse. The Occupy Movement has successfully created at least some discursive space in mainstream media for radical critiques such as this one.

Capitalism is a Pyramid Scheme

. CrimethInc. Workers’ Collective and Packard Jennings. Pdf back of poster. 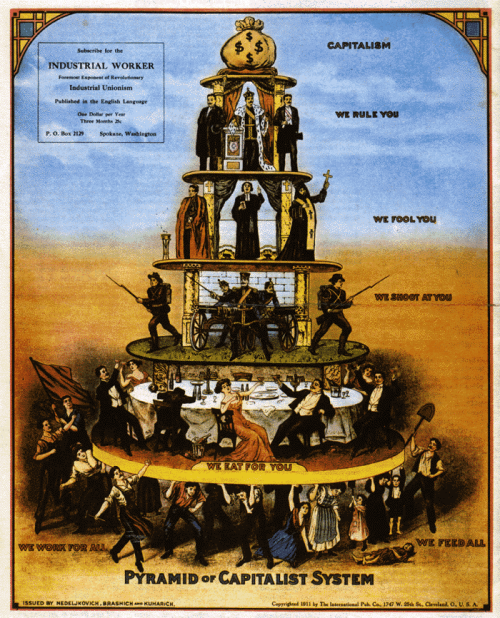 The poster included with the CrimethInc. Workers’ Collective book ‘Work’ is based on a classic illustration titled ‘Pyramid of the Capitalist System’ published in the Industrial Worker in 1911. This modern version presents capitalism as a pyramid wherein stability can only be maintained by the use of more resources, i.e. by ‘colonizing new continents, workforces, and aspects of our lives’. Structural inequalities are maintained by ever-escalating force and militarization. The image displays the relationship and hierarchy within the capitalist economy. The system is dependent on the complicity of population who must be convinced to compete against each in order to improve our own position and move up the pyramid. The entire system is based on social and ecological exploitation and the invisibility of these consequences of capitalism modes of production. The caption says; ‘no pyramid scheme can go on forever. Sooner or later it’s bound to crash: global warming and recession are just the first warning signs.’  The poster calls on audiences to: ‘join forces and establish another way of life.’

This animation is another example of the use of game of Monopoly to expose the systemic dynamic of capitalism, in this case focusing on the growth of the financial markets and nature. The video warns that the same speculative practices and financial mechanisms that caused the economic crisis are now being re-designed to manage ‘ecosystem services’, i.e. natural spaces (forests and ecosystems) and biodiversity (animals and plants).

The danger of excessive capital accumulation due to speculation and the submission of nature to these speculative practices must not be underestimated. For example, the emission-trading scheme in Europe provides a profitable way for companies to continue to pollute. The so-called ‘Green Economy’ proposed by the UN threatens to start a new phase of enclosures and facilitate global land grabbing by privatizing natural resources. Social movements must resist privitisation to protect the commons. We must create more localized economies, food sovereignty, decentralized clean energy and shrink the financial sector. The video asks viewers to become engaged in fighting against financial markets and fighting for real alternatives.

Images are powerful tools for the communication of quantitative information. Designers can help audiences understand quantity by illustrating comparisons. When it comes to the vast sums blown in the recent economic crisis, the numbers can be hard to grasp. Economic literacy is now more vital than ever as we all struggle to make sense to the mess created by the unregulated financial sector over the past decade.

David McCandless does a good job of putting the £7500bn total cost of the 2008-2009 credit crisis in context in two animations (for the UK and USA contexts). The animations start with the cost of Iraq war – predicted and actual. The video moves through various quantities such as £2bn OPEC climate change fund; £13bn cost to save the Amazon Rainforest; £102bn yearly NHS budget; £104 Trident nuclear missile system; £46bn UK defense budget and £25bn UK corporate tax avoidance per year. Here I need to note that McCandless’ claim that the UK has the second largest in the world is factually incorrect. I have alerted him to this fact and after some investigation, he revised his figures. Both China and Russia have higher defense budgets than the United Kingdom.

As the music speeds up we are faced with cost of the £7500bn total global cost of the credit crisis as a block that dwarfs all other quantities and clearly demonstrates exactly what a mess our economy is in. The vast amount of money that was wasted in the 2008-2009 credit crisis was the result of unregulated financial markets, unbridled capitalism and political systems serving the interests of financial elites. This problem has not disappeared but will continue to destroy future prospects for the 99%.

The Steady State Economy: A Totem of Real Happiness – EcoLabs and Angela Morelli

This graphic was produced by my own non-profit design studio in collaboration with graphic designer Angela Morelli. EcoLabs developed a brief based on ecological economist Herman Daly’s vision of a ‘steady state’ economic system and Angela Morelli transformed the concept into a stunning totem. A steady state system provides well-being for the population without economic growth and within the carrying capacity of the ecological system. What this means is that prosperity is created without harming the capacity of nature to sustain future generations. The graphic displays a hierarchy of ideas and illustrates a series of specific policy initiatives that would lead to social and environmental sustainability while limiting the power of the financial system. Examples of policy initiatives illustrated include the creation of maximum incomes to prevent increasingly polarised income disparities. EcoLabs is not promoting this steady state system as a future utopia (as we recognize that it has its own problems). Instead we use the model as an educational tool and speculative model for re-imagining social relations and economic systems designed for greater social justice and environmental sustainability. Download the Pdf here.

And one last one I don’t have time to write about: ‘Why is there so much Debt?’ by Positive Money UK

Text from website: ‘Individuals and families in the UK have a total of £1,170 billion of debt. But who did we borrow all this money from? Was it from an army of grannies who have spent their whole lives putting money away for a rainy day? No. When you go into a bank and borrow a large amount of money to buy a small amount of house, that money doesn’t come from somebody else’s savings. It’s just created, out of nothing, by the bank, with a few taps on a computer keyboard.’

Music and animation by Henry Edmonds

3 thoughts on “Visualising the Economic System – and Alternatives”