I returned last night from four busy days at the Design History Society’s Design Activism and Social Change conference in Barcelona. Convenor Guy Julier has a more thorough conference blog here. The conference provided a space to debate emergent themes in design activism: politics and design, ecology and design, the role of agency, reflection vs. action, the importance of the language we use, peak oil and the capacity of design to address social and environmental problems within capitalism and current forms of democracy. The event started well with Henk Oosterling’s keynote describing a movement to a philosophy of relations. Attempts to repress ontological connectedness are destructive and a role of design is now to internalise what is currently externalised in order to better reflect the essential conditions of connectedness.

The conference ended with a discussion by Cameron Tomeron, Damien White and Karen Pinkus chaired by Clive Dilnot about Tony Fry’s work the current de-futuring state of design, stuck in a system of structural un-sustainability. Some of us had already assumed a role of presenting the ecological situation that is often avoided in design, but this panel examined the environment crisis in term of its most serious implications and logical conclusions. They thrashed out the critique of liberalism and pluralism presented by Fry. Damien White discussed problems with Fry’s apparent top-down approach to solutions. Design has been complicit with the creation of de-futuring conditions – can it change? Fry’s notion of re-directed practice holds potential. Existing institutions cannot deliver the kinds of change we need to make – what role can design play in creating new social institutions and forms of democracy? Meanwhile, how can designers deal with the lack of agency that accompanies the racketing up of apocalyptic themes?

A problem was the extravagant amounts of food and the heavy meat content in our lunches and dinners. A little thought about the politics and ecology of food is necessary. Although conferences are terminally unsustainable due to carbon intensive nature of the gathering, food is one of the easiest things to change. Another problem was lack of representatives from the Global South. Thankfully there were a few. Suchitra Sheth spoke on ‘Designing Modern India: Gandhi as Design Activist’. The paper examined how Gandhi ‘created a complex web of visual symbols, products and institutional systems’ focusing on the ‘Salt March‘ campaign of 1930. Look out for her paper which should be available on the conference website soon.

The final keynote speaker was Laura Kurgan whose work on maps includes ‘million-dollar blocks’. Here communication design engages with complexity and the development of spatial thought. Maps are interpretative representations of data – there is no such thing as neutral data in communication design. In the process of making information from raw data we necessarily make strategic decisions on which data to highlight. This is an important theme for the blossoming field of information design. 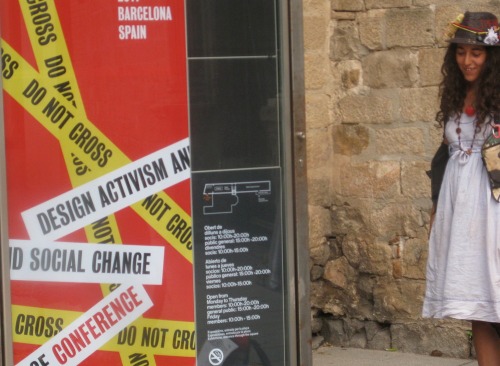 Drinking strong coffee outside the conference at 9am on the final day I was approached by two young activists who explained they were part of the ‘Fuck for Forests‘ group. The group raises money from sex to stop the destruction of the rainforests in Tasmania and the Amazon while simultaneously confronting the legacy of repressive sexual attitudes: ‘Our bodies, sexuality and nature are under suppression. FFF wants to reclaim nature & sexuality and show a sex positive culture. We need pleasure, not power!‘ They set up at the entrance to the conference and there was then an interesting merging of worlds as the design historians and design activists confronted these two FFF activists.

In fact the merging of world was a feature of the entire conference. The combination of two communities, design activists and design historians was a fertile mix. Design historians have cultivated a discursive space for their field and the potential is now for design activists to develop a community of practice. A little support is needed, but there was a real desire to bring forth some sort of outcome. Stay tuned and get in touch if you are interested.

One thought on “Design History Society does Design Activism”